Spotted Lanternfly: A colorful cause for concern 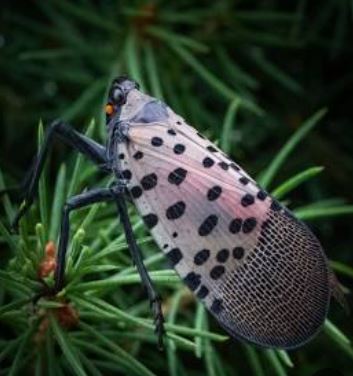 Spotted lanternfly, Lycorma delicatula (White) (Hemiptera: Fulgoridae), is a sap-feeding insect native to China and other parts of Southeast Asia. It was first found in the United States in 2014 in Berks County, southeastern Pennsylvania, and then spread to other eastern U.S. states. You can check its current status in Michigan by visiting the State’s invasive species website: http://Michigan.gov/spottedlanternfly.

This invasive pest can feed on at least 70 species of trees, as well as vines and shrubs, including fruit trees, hops, grapevines and several hardwoods. Spotted lanternfly can be easily spread to new locations when people accidentally transport eggs or other life stages into new areas. Quarantines have been established to prevent further spread of SLF life stages by people moving infested material. Residents or visitors to areas where SLF occurs should be aware of the risks of moving this invasive pest. Check vehicles and any outdoor items for egg masses or other life stages before leaving areas where SLF has been reported.

Spotted lanternfly females can lay their eggs on nearly any surface including vehicles, patio furniture and outdoor equipment, as well as trees. This means SLF can be easily spread over long distances if people move the articles bearing the eggs.

Spotted lanternfly feeds by sucking sap from the stems and trunks of a wide variety of plants. At high SLF densities, this feeding can reduce vigor of trees and vines. Dead shoots on some hosts, particularly black walnut trees, have been observed in Pennsylvania.

To feed on plant sap, SLF pierce the bark, creating wounds that can allow plant pathogens to infect trees. Immature and adult SLFs excrete tremendous amounts of sugary honeydew as they feed, which lands on plants around and beneath them. This sticky honeydew attracts other pests, particularly hornets, wasps and ants, causing more annoyance for people in affected areas and complicating crop harvests. Black sooty mold grows on the honeydew, affecting the appearance and potentially the health of herbaceous plants, shrubs and seedlings beneath infested trees. Sooty mold can reduce the amount of light reaching the surface of the leaves, decreasing photosynthesis rates.

Tree of heaven, Ailanthus altissima, is a highly preferred and perhaps required host for SLF. Tree of heaven is native to China, but was widely planted in much of the eastern U.S. decades ago for erosion control. It was also planted as an ornamental street tree in many municipalities. Female trees produce abundant seeds and tree of heaven can grow on a variety of soils, including disturbed areas. Tree of heaven is now considered an invasive plant and has spread across much of the United States.

The greatest economic impacts of SLF may result from its ability to feed on many types of crop plants. Tree hosts of SLF include apple, plum, cherry, peach and apricot. High densities of SLF have also been observed on grape vines and on hops vines. Neither the immature nor adult SLFs feed on the fruits themselves, but large numbers of insects feeding on these plants during the harvest season can affect fruit quality. The insects remove significant amounts of sap and the sooty mold can contaminate berries. This can reduce marketable yields, delay fruit ripening and reduce winter tolerance to cold weather.

Spotted lanternflies cannot harm humans directly, as they neither bite nor sting, but their presence, outdoors and indoors, can be unpleasant.

Spotted lanternfly completes one generation per year (see figure). Eggs are laid in a mass coated in an off-white or gray substance, which cracks and darkens to a grayish-brown over time. Egg masses resemble a small patch of mud or “seed pods” and can be found on vehicles, tree trunks, boulders and stones, bricks and other outdoor surfaces. Eggs hatch in spring and the small black nymphs with white spots begin feeding. Spotted lanternflies will complete four stages, called instars, as immature nymphs before becoming adults. First, second and third instar nymphs are black with white markings, Fourth instar nymphs are reddish-orange with black and white markings.

The nymphs eventually develop into adults, the only stage with wings. Adult SLF are about an inch long and half an inch wide, with grayish forewings with black spots and red, white and black striped hindwings. A few adults may appear in mid-summer but they are most common in late summer and fall.

After mating, adult females lay eggs, usually beginning in September and continuing through November or even early December. Eggs overwinter until the following April or May, when the first instar nymphs hatch and begin feeding.

Preventing or at least slowing the spread of SLF is important to minimize impacts and control costs. When leaving an area where SLF is present, check vehicles and outdoor equipment for egg masses or any other life stages. Do not move nursery trees, firewood, mulch or related materials out of quarantined areas. Keep windows of vehicles rolled up in areas where adult SLFs are active and avoid parking below infested trees.

Egg masses that are accessible can be scraped off and destroyed, eliminating insects that would otherwise hatch and feed. Use a stick, plastic card, putty knife or similar tool to scrape eggs into a container filled with alcohol, hand sanitizer or very soapy water to kill the eggs. Eggs can also be burned in a campfire. Simply mashing eggs is often not entirely effective. Some residents in Pennsylvania have wrapped plastic wrap tightly around tree trunks and then coated it with a sticky substance to capture nymphs as they climb up the trunk to feed on the younger shoots. These sticky bands may be useful if SLF densities are high. Bands will need to be checked and replaced at least every other week.

Other insects and occasionally small birds or even small mammals may be accidentally trapped in the sticky bands. Surrounding the sticky band with wire or mesh can help prevent birds and mammals from being captured.

In Pennsylvania, removing tree of heaven, the preferred host, appears to reduce local abundance of SLF. Cutting down female trees (those producing seeds), or killing the trees with a herbicide containing triclopyr will limit establishment of new trees of heaven.

Adopting a trap tree approach can be even more effective. Select a male tree of heaven (one that does not produce seeds) and remove or fell other trees of heaven in the vicinity. Treat the remaining “trap tree” with a systemic insecticide product containing dinotefuran as the active ingredient. Systemic insecticides are transported up the trunk and into the canopy and will control SLF nymphs and adults when they try to feed on treated trees. This control method works best June through August. Insecticides can be used on their own to control SLF on other host trees as well. Only use insecticides registered with the EPA and follow all application and personal safety instructions on the label. 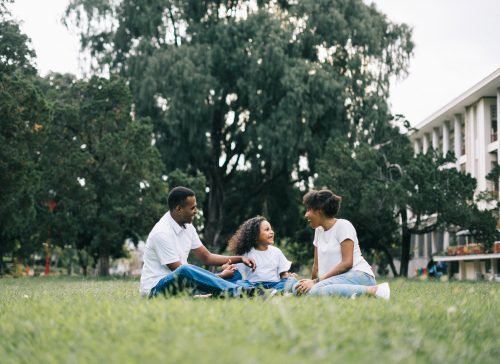